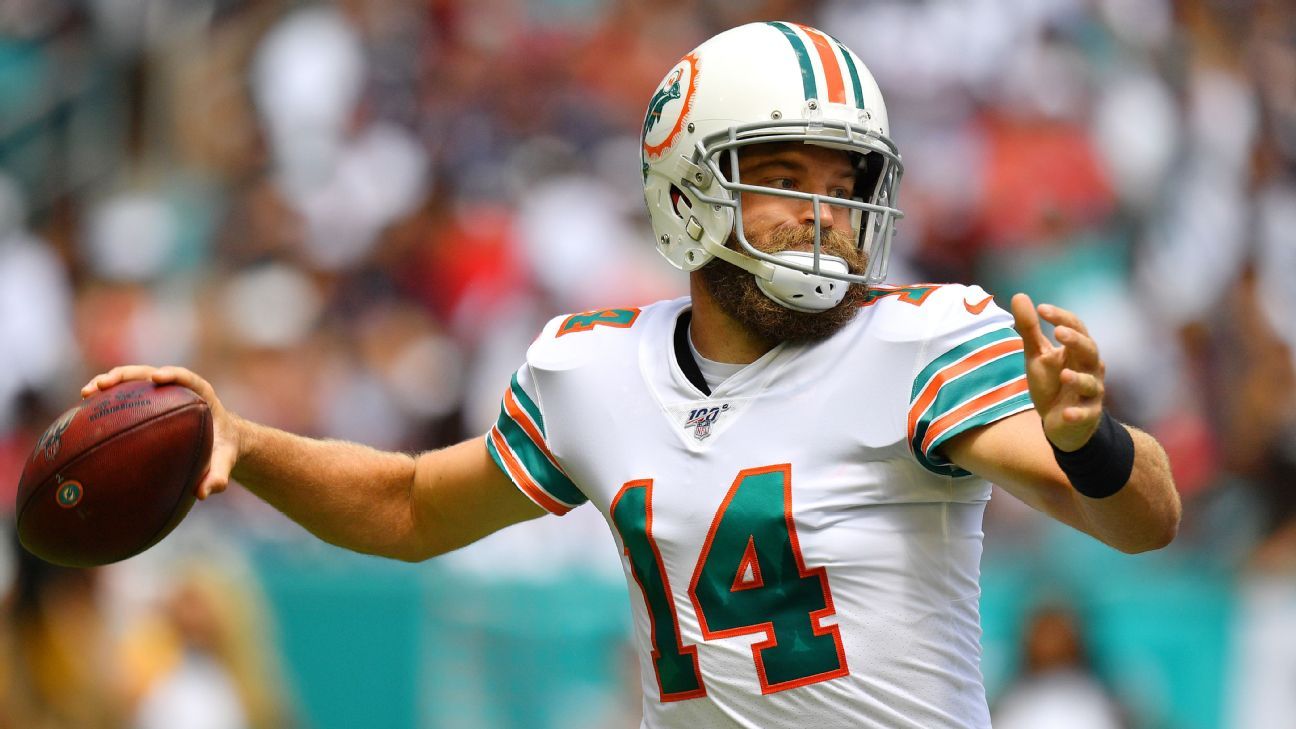 DAVIE, Fla. — Miami Dolphins quarterback Ryan Fitzpatrick went hunting for contact. He wanted to feel like a kid again, playing loose, with an aura of invincibility.

Fitzpatrick flung a Buffalo Bills defender off of him, evading a would-be sack and scampering downhill. He didn’t make the smart play by sliding ahead of the closing defender or diving to the side for a touchdown. For a few seconds, he wasn’t a 36-year-old, veteran signal-caller. Instead, Fitzpatrick lowered his shoulder on safety Micah Hyde and tumbled into the end zone for six points.

“I love those. It just brings me back to Pop Warner, and as a quarterback I don’t get to do that much. I got a little bit of a running start, so it wasn’t fair,” Fitzpatrick said. “I probably could’ve avoided it to get into the end zone, but that’s just a play that I like.”

His offensive linemen picked up him, and teammates showered him with love. It doesn’t surprise them. Fitzpatrick’s run was a punch in a comeback effort that ultimately failed, but it left a lasting mark.

The FitzMagic experience — a somewhat reckless, unpredictable ball of loose, competitive fire — is a look into the quarterback’s repertoire. The Dolphins (0-6) don’t have much to hang their hats on, but Fitzpatrick’s “Pop Warner” mindset has energized a young team hungry for some positivity in what has become something of a lost season.

Since Fitzpatrick reentered the lineup two weeks ago, the Dolphins have scored five touchdowns in five quarters. Miami was a two-point conversion away from a victory against Washington. The Dolphins led for nearly half the game in Buffalo, but couldn’t hold on. There’s reason to believe a win could be near.

Fitzpatrick, along with the coaches’ aggressive playcalling, has helped the Dolphins look like a different team in recent weeks.

“I’m the perfect man for the job, because I’ve been through it, I have zero ego, and all I want to do is go out there and win. I want to bring an energy. I want what I’m doing out there to be infectious to other guys,” Fitzpatrick said. “We have a lot of young guys that haven’t really played much at this level, and we have some guys that are a year or two into it. But I want to be that ‘stable guy’ that they can look to when things get a little shaky, and I’ve been in this situation a lot before. It’s something that I embrace. I’ve had a different career than a lot of different quarterbacks, but this has been a career that I’ve loved and a position that I like being in.”

Fitzpatrick feels like he’s the perfect man to lead this lowly Dolphins team. He doesn’t care that he’s a stopgap for the quarterback Miami is fated to pick in the 2020 NFL draft. He doesn’t care that multiple quarterbacks (Teddy Bridgewater and Tyrod Taylor) passed on going to Miami because of the dire state of the team’s talent. He wants to stack these weekly “minor wins,” as he calls them, in order to eventually get the real one.

“It’s contagious when Fitz does that,” offensive coordinator Chad O’Shea said. “His ability to play off schedule some and make plays on his own is something he’s always had the ability to do. I know it’s something that the team gets rallied up and rallies around him when he does that. That’s one of the traits that you really like about Fitz.”

When the Dolphins visit the Pittsburgh Steelers on Monday (8:20 p.m. ET, ESPN), Fitzpatrick is the wild card who could help Miami pull off an upset.

“We’re a young team and Fitz is one of the only veterans here,” Williams said. “He’s taking his wisdom and knowledge and spreading it over all of us. We need that.”