KANSAS CITY, Mo. — The Kansas City Chiefs are one of 20 NFL franchises to win a Super Bowl, their lone victory in the NFL championship game coming 50 years ago in Super Bowl IV.

But few, if any, Super Bowl-winning team had the moment captured quite the way the Chiefs did. Hank Stram was the first coach to wear a sideline microphone for NFL Films, and his comments during the Chiefs’ 23-7 victory over the Minnesota Vikings — whom the Chiefs face on Sunday (1 p.m. ET, Fox) — were recorded for history.

Many fans from that era have died. Memories have faded for others. But the Chiefs’ long-ago Super Bowl victory lives on through Stram’s comments.

“You think of the picture of Joe Namath walking off and holding up the No. 1,” Chiefs president Mark Donovan said. “The Steelers have the Immaculate Reception. I grew up in Pittsburgh and I can still see that play in my head.

“This one is different because it’s a Super Bowl, it’s a coach, it’s verbiage. I think it’s unique that way.”

NFL Films president Steve Sabol once said Super Bowl IV was one of the most popular Super Bowl videos it ever produced.

“That video kept Dad’s legacy alive,” Stram’s son Dale said. “Before he died, it was always fun because I’d be walking through an airport with Dad and somebody would come up to him and go, ’65 Toss Power Trap’ or other things that he said when he was miked up. He loved it. He was such a people guy.

“He was always so honored that people even remembered. Fame is so fleeting.” 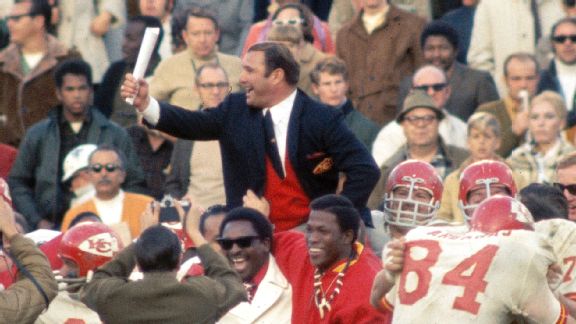 Hall of Fame-laden Chiefs of 50 years ago won only one title. Why? Story

It might make for a better story to say that NFL Films had no idea how popular the miking of Stram would become. But it did.

“As filmmakers, we knew that win or lose he was going to be great,” Sabol later told NFL Films. Sabol died in 2012. “Hank was the first coach that understood that football was entertainment as well as sport. … Hank understood that he was also a performer as well as a coach.”

Sabol said in return for wearing the microphone, Stram wanted money, or in his words “coin of the realm.” After some negotiations, they settled on $500.

“I don’t think that coin of the realm could possibly cover the amount of absolutely legendary press that miking has gotten over the course of time,” said Rob Alberino, who formerly worked as a filmmaker for NFL Films. “I think it’s the finest miking ever in the history of NFL Films.

“Sometimes you capture lightning in a bottle. Sometimes something transcends what you’re trying to accomplish. What NFL Films was trying to do was find a unique way to deliver the sport to people. The idea was to get people to fall in love with the person as well as the sport. That’s what that miking did. Hank Stram became a very, very lovable character because of that. It set a precedent that nobody could even come close to. They did it during the Super Bowl when an underdog, one that wasn’t even in the NFL by the way, took it to this juggernaut of a team. That’s storybook stuff.”

Stram’s charisma and use of colorful phrases have stood the test of time. At one point he famously urged the Chiefs to “matriculate the ball down the field.” He referred to Chiefs players as rats, which to Stram was a term of endearment. 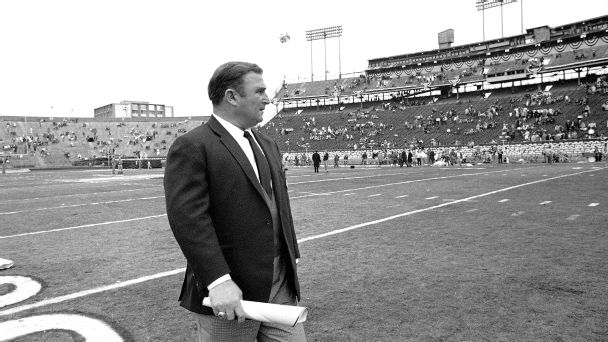 And that playcall his son referred to, 65 Toss Power Trap, was one Stram predicted the Chiefs would score a touchdown on, saying, “It might pop wide open, rats.”

The Chiefs indeed scored a touchdown on Mike Garrett’s 4-yard run. Afterward, a celebratory Stram said, “I tell you that baby was there.”

The Chiefs did that several years ago in honor of the franchise’s only Super Bowl victory and Stram’s role in popularizing it.

“We have this iconic moment,” Donovan said. “It is one of the most celebratory moments in our franchise history and we’ve got audio and we’ve got video. All of those pieces just sort of said, ‘That’s it.'”

Schottenheimer on Carson: ‘Chris is our guy’ – Chris Carson | SEA