FOXBOROUGH, Mass. — When the Baltimore Ravens were seeking a coach in January 2008, longtime executive vice president Kevin Byrne was part of the search committee, and remembers owner Steve Bisciotti entering the room with some news. Bisciotti told the committee he had received a phone call from New England Patriots coach Bill Belichick, who relayed words of support for John Harbaugh.

It wasn’t necessarily an endorsement that pushed Harbaugh’s candidacy over the goal line, but it further solidified the direction the search committee was heading. Harbaugh was an unconventional choice at the time, because his primary background came as a special teams coach. Belichick, of course, has long had an affinity for special teams.

If Belichick had a crystal football, he would have seen he was playing a small role in creating a competitive dynamic — Patriots vs. Ravens, Belichick vs. Harbaugh — that has challenged him in ways many others haven’t. It has also created some unforgettable moments, and even a little controversy.

The Belichick-Harbaugh connection traces back to Harbaugh’s tenure as an assistant at the University of Cincinnati (1989-96), which intersected with Belichick’s time as Cleveland Browns head coach (1991-95).

“He came down to scout, we sat down and talked about players, and I was just blown away about how gracious he was and how thorough he was,” Harbaugh recalled this week. “I kind of started really paying attention to him, and what he does and how he does it.”

“Through Scott, who is one of my mentors, Coach Belichick gave me the time of day a few times and I was able to ask him questions, chat with him here and there at the [NFL] combine and different things like that,” Harbaugh said. “I guess I was just amazed with how humble he was and how willing he was to spend some time with a young coach.”

Such was the foundation that contributed to Belichick supporting Harbaugh’s candidacy, with his already existing friendship with Bisciotti and Ravens vice president of player personnel Ozzie Newsome also part of the dynamic.

“I had met John, knew him for a few years. No real big story to it,” Belichick said of his connection to Harbaugh. “You meet a lot of coaches in this business and you go out and scout, go to the combine and workouts and so forth; developed a relationship and friendship with John, and ultimately, it’s carried us to where it’s carried us to.”

Belichick holds a 7-3 edge in games against Harbaugh, with two of the losses coming in the playoffs — a wild-card game after the 2009 regular season, and the AFC Championship Game following the 2011 season.

Because of that, Harbaugh finds himself in a rare class of NFL coaches who have matched Belichick when the stakes were highest, a small group headlined by former New York Giants coach Tom Coughlin, who led his team to two Super Bowl wins against Belichick’s Patriots.

The respect with which the 67-year-old Belichick speaks of Harbaugh, 57, reflects his standing.

“John’s built a solid program down there,” Belichick said this week. “He’s lost coordinators in every unit — offense, defense, special teams — and there’s been player turnover at some key positions and they continue to do well, continue to be competitive and win with different quarterbacks, different styles of offense; and losing some defensive players that were among the best in the league at their positions.

“They continue to play well, so I think that’s the mark of a good program, good players, good personnel department, good coaching, good management of the staff as it transitions in a tough division. John and Ozzie, Steve and the people that run the organization deserve a lot of credit for that.”

Belichick’s Patriots have pulled out all the stops against Harbaugh’s Ravens, most notably declaring an eligible receiver as ineligible in a divisional-round playoff game in January 2015, which created confusion for the Baltimore defense and helped turn the Patriots’ fortunes around in a 35-31 comeback victory. Harbaugh was enraged, quarterback Tom Brady said the Ravens coach should study the rule book, and the NFL later banned that tactic.

That was also the game that preceded the Patriots’ victory against the Indianapolis Colts in the AFC Championship, which sparked the NFL’s investigation into the air-pressure level of footballs used by the Patriots. Some speculated the Ravens might have tipped off the Colts, but the Ravens denied that, with special-teams coach Jerry Rosburg explaining that any communication he had with then-Colts coach Chuck Pagano was related to a trick substitution play. 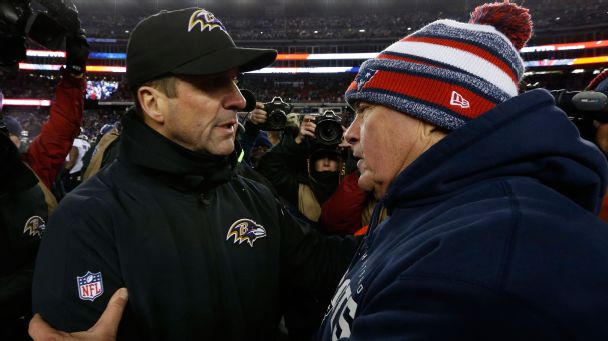 The Ravens and Patriots have met once since that time, in December 2016, with the Patriots winning at home, 30-23. The two-season void has contributed to the simmering of intensity, but the heat is about to be turned up again Sunday night.

Part of what makes Patriots-Ravens matchups competitive is the teams are built similarly. When Belichick talks about the Ravens, he almost sounds as if he’s describing his own team.

“It’s a tough, hard-nosed football team,” he said, starting, not surprisingly, with how they are “very good in the kicking game.”

This is the common link that three current Patriots players who previously played for Harbaugh — tight end Ben Watson, safety Terrence Brooks and cornerback Justin Bethel — all noted as well.

Bethel, who is a three-time Pro Bowler as a special-teamer, was released by the Ravens two weeks ago so the team could protect a fourth-round compensatory draft choice. Harbaugh acknowledged it was a tough decision because it weakens the club’s special-teams units. Not surprisingly, the Patriots signed Bethel the next day.

“One thing I’ve noticed, because I’m [primarily] a special-teams player, is how seriously they both take special teams, how much importance they put into it, how they make the team realize how big a part of the game it is,” Bethel said. “Both of them go over it, and emphasize how big of a deal it can be to dominate that part of the game.”

As the coaches get set to renew their rivalry, Harbaugh paid Belichick the highest compliment this week by calling him “the best in the business.” He said that over the years, even though they have been fierce competitors, Belichick has been “nothing but gracious” to him.

“Competitive, obviously, as can be. But just gracious and the type of relationship that I definitely cherished and have great respect for him,” Harbaugh said.

“If you’re a head coach, or you’re any kind of coach in this league and you’re not watching what Bill Belichick is doing with his football team every single week, even throughout the offseason, then I think you’re making a big mistake. Because nobody’s ever done it better.”