In the meeting, Shanahan leads the team through practice film, what he thinks will work on the ground against the upcoming opponent, counterpunches to the defensive approach and how each run play can play off the others and, potentially, set up opportunities in the passing game.

As a bonus, Shanahan offers a rewind of the previous game’s running game highlights. It’s a hopeful reminder of what it should look like when everything is clicking and the Niners are pushing around the opposing defense, as well as a discussion of what they need to do to keep it rolling.

More often than not, much of what the 49ers coaches believe will happen comes to fruition on game day. Through the first four weeks of this season, this has been happening at an almost alarming rate.

“They are incredibly smart people,” tight end George Kittle said. “And they call stuff out on a Wednesday meeting, like, ‘Hey, this is what it’s gonna look like,’ and then Monday night it happens, and you’re like, ‘Oh, wow, I’m not going to doubt you.’ It’s just kind of you believe in them because they’re smart guys, they’ve been doing it for a long time, but also their love for the game and their passion for it kind of drives this team.”

In a league full of high-tech aerodynamics, it can be easy to lump Shanahan and his offense in with the rest. Although Shanahan can carve teams up with route combinations, the heartbeat of his offense has always been the running game.

It’s the engine that revs the car, and at least so far, it has become the Niners’ identity: a fast, physical team that will run the rock at will and get after you on defense.

“It’s something you always want to do as a coach,” Shanahan said. “It’s the easiest way to win when you play real good defense and you can run the ball. It takes the pressure off a lot of people and doesn’t put you in a lot of risky situations but also can help you get some easier explosives, too. That’s kind of the goal, always. You’re always trying to work to get that type of a team, and it’s been like that so far, but we’re going to have a lot of challenges ahead of us.”

Indeed, the challenges will only get more difficult, starting Sunday against the Los Angeles Rams. But the 49ers believe their running game is built to last and succeed against anyone.

That belief is rooted in Shanahan’s and McDaniel’s cerebral approach to the run game. As right tackle Mike McGlinchey points out, Shanahan isn’t using a magic wand when he devises a plan for the ground game each week. Instead, he, McDaniel and Benton meticulously pick apart opposing defenses, examine where the weaknesses might be and predict what those defenses might do to combat them.

On top of that, Shanahan and McDaniel use pre-snap motions and alignments as a means of getting defenses to tip their hands and getting blockers on defenders at the right angles.

The Niners’ 31-3 throttling of the Cleveland Browns on Monday might have been their run game at its best and most diverse. San Francisco’s first six run plays went to six different ball carriers, gaining 123 yards and a touchdown. That included running back Matt Breida’s 83-yard touchdown run on which a slight pre-snap motion by fullback Kyle Juszczyk not only moved the eyes of Browns defenders in the wrong direction but also gave Juszczyk a perfect angle to block defensive end Olivier Vernon toward the sideline, opening a massive hole.

Breida’s touchdown run was San Francisco’s first play from scrimmage, and the team ran the ball seemingly at will all night. By the time it was over, the Niners had 275 rushing yards on 40 attempts for a robust average of 6.9 yards per rush. Their 275 rushing yards were the most by the Niners since Week 16 of 2014, when they rushed for 355 yards.

Matthew Berry and Field Yates love the fantasy value of RBs Matt Breida and Tevin Coleman because of the 49ers’ run-heavy offense.

According to ESPN Stats & Information, only two teams in the past 10 seasons have averaged more yards before contact when rushing 40 times than the Niners’ 5.48 yards before contact against the Browns. In other words, the Niners’ combination of scheme and blocking is allowing their backs speed to take over and pick up chunks of yards without so much as being touched.

“It’s like chess and a puzzle with Kyle and Mike,” McGlinchey said. “It’s incredible, and it’s just doing simple things and exploiting motions and certain matchups and defensive philosophies against themselves.”

In 2018, the 49ers finished 13th in the NFL in rushing yards and 12th in yards per carry. It was a solid, if uneven, rushing attack that relied largely on Breida to break a long run but struggled to move the chains or gain positive yards consistently as injuries prevented the necessary continuity. 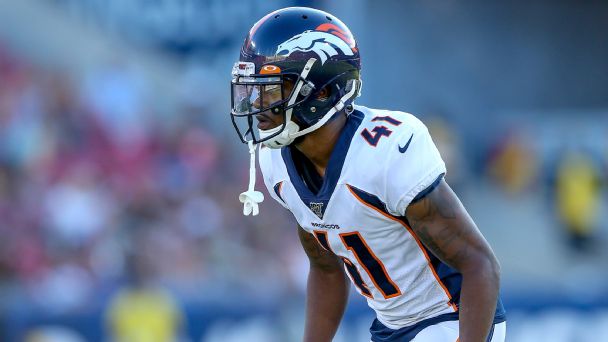 This year, the Niners brought back the same starting offensive line and added Tevin Coleman to a speedy group of incumbents that included Breida, Raheem Mostert and Jeff Wilson Jr. They attribute much of their success to having the same guys in the same places. In a rushing attack that relies on a lot of zone principles, that continuity can’t be overstated.

“We had a young team when I first came here,” Breida said. “… Guys are understanding the offense better now, and I feel like everyone has gotten better.”

What’s more, the Niners believe there are still ways to improve. They’ll be without Juszczyk for four-to-six weeks as he deals with a knee sprain, and left tackle Joe Staley is working his way back from a broken fibula. They’re also making it a point to finish games better.

“I know the NFL has gotten a little pass-happy here in the last couple years, but Kyle is a firm believer that the team goes as the run game goes,” McGlinchey said. “We believe in that as well. It is awesome up front as an offensive lineman to have a head coach that believes in you like that. That can scheme us up to put us all in a great position for us to succeed.”

‘Still a matter of when, not if’ Garrett axed – Jason Garrett | DAL